CADAL signs a joint Open Letter with the Commission on the Status of Women (CSW), Human Rights Watch (HRW) and the International Coalition to Stop Crimes Against Humanity in North Korea (ICNK) on the lack of pressure from the United Nations regarding human rights violations in North Korea. CADAL understands that it is essential that the United Nations Security Council and the General Assembly intensify their scrutiny and use all the tools of International Law to pressure the regime to account for its actions.

Today CADAL has signed the joint open letter, one of many that have been crucial in the efforts of numerous organizations around the world to shed light on the violation and the situation of Human Rights in North Korea. It has been prepared with colleagues from the Commission on the Status of Women (CSW) and the International Coalition to Stop Crimes Against Humanity in North Korea (ICNK), calling on the UN Security Council and the General Assembly to intensify their scrutiny of the horrific human rights situation in North Korea.

We are very concerned that the failure from the UN Security Council to hold discussions on North Korean human rights in its formal agenda in the past three years sends Kim Jong Un the wrong message that Pyongyang can continue committing grave violations against the North Korean people with impunity. Action is needed so that the government’s crimes cannot continue, and those responsible are held accountable.

The people of North Korea have suffered under the brutal rule of the Kim family regime since 1948. Every year on October 10th, people in the Democratic People’s Republic of Korea (DPRK) are forced to celebrate the founding of the Workers’ Party of Korea. This year will be no different.

It is critical that the United Nations Security Council and General Assembly intensify their scrutiny of the appalling human rights situation in North Korea. The plight of the people in the DPRK grows worse by the day. The international community needs to make clear to the DPRK leadership that those responsible for crimes against humanity and other grave human rights violations will someday be held accountable.

North Korean leader Kim Jong Un and the Workers’ Party of Korea are directly responsible for the dire human rights situation in North Korea. The government has consistently prioritized maintaining power at the expense of the basic rights of its people, including by developing nuclear armaments and intercontinental ballistic missiles while its population faces starvation. 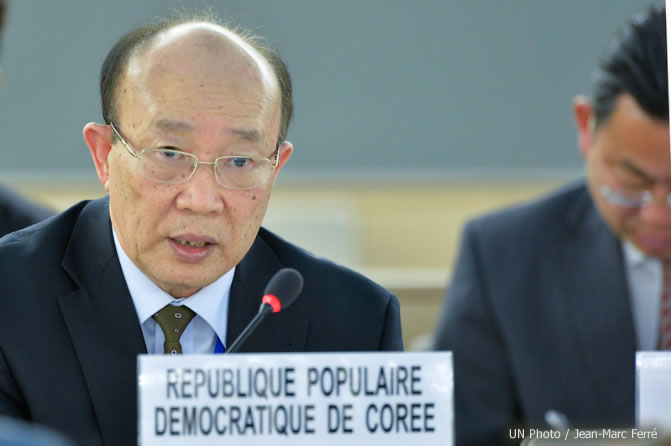 The government’s continuing efforts to suppress the right to freedom of expression, including by seeking to control the freedom of thought and opinion of the North Korean people, led to the  adoption of the “DPRK  law on rejecting reactionary ideology and culture” in December 2020. The law prohibits distributing media from South Korea, the United States and Japan and threatens violators with the death penalty. Simply watching such media content can result in a sentence of 15 years in an ordinary crimes prison camp (kyohwaso).

In April 2021, Kim Jong Un published a letter about “dangerous poisons,” expressing his desire to stop foreign speech, hairstyles, and clothes among young people. Were the government to act on these pronouncements, it would be adding to its already poor record on privacy rights in North Korea.

In July 2021, the United Kingdom All-Party Parliamentary Group (APPG) on North Korea released a report finding that the human rights situation in North Korea has remained dire since the landmark 2014 UN Commission of Inquiry report. Both the UN Commission of Inquiry and the APPG found the DPRK to be committing crimes against humanity against the North Korean people. Specifically, the APPG found that DPRK officials continue to engage in murder, torture, slavery, persecution, and sexual and gender-based violence, including rape, sex trafficking, forced abortions and infanticide. Concerned governments should adopt a two-track approach of accountability and engagement with the DPRK. Simply focusing on matters of either security or the platitudes of political dialogue are not sufficient. Mainstreaming both security issues and human rights concerns in bilateral and multilateral relations with the DPRK remains essential.

States should respond with action to the UN Secretary General Antonio Guterres’s latest report to the 76th session of the UN General Assembly, which describes the systematic and widespread violations against those considered a “threat” to the North Korean government, including wrongful imprisonment, torture, forced labor (from conscripted soldiers, the general population, a significant number of detainees, and children), and enforced or involuntary disappearances. It also raises concerns over food insecurity and the curtailment of civil, political, economic, social, and cultural rights in the face of the Covid-19 pandemic. The government has yet to respond to requests for country visits by the UN Special Rapporteurs on the right to safe drinking water and sanitation, and on contemporary forms of slavery, including its causes and consequences.

The 2014 Commission of Inquiry report found that the “gravity, scale and nature of [the human rights violations committed by the North Korean government reveal a State that does not have any parallel in the contemporary world.” It recommended the international community to pursue “a multi-faceted strategy that combines strong accountability measures targeting those most responsible for crimes against humanity,” and asked the UN Security Council “refer the situation in the DPRK to the International Criminal Court.”

Concerned governments should press for a full range of available international accountability mechanisms that align with the Commission of Inquiry’s recommendations.

We urge the UN Security Council to:

Resume regular meetings on the situation of human rights in the DPRK as part of its official agenda. The Council’s failure to keep the human rights situation in the DPRK regularly on the agenda for the past three years has sent precisely the wrong message to Pyongyang: that the government can continue committing grave violations against the North Korean people with impunity.

Ensure that the Council meetings on North Korea’s human rights situation also focus on accountability and the possibility of the Council referring North Korea to the International Criminal Court.

We also call on the UN General Assembly to continue to scrutinize the human rights situation in the DPRK.

It is crucial that the UN member states send a strong message to North Korea: action is needed so that the government’s crimes cannot continue, and all those responsible for crimes against humanity and other human rights violations are held to account.